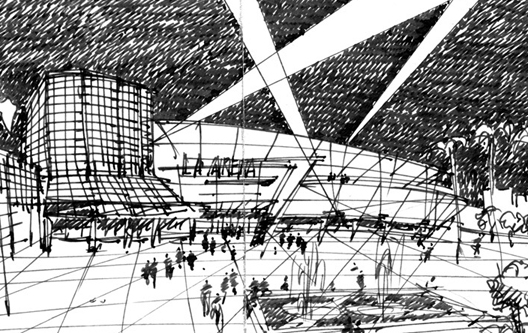 The primary intent of this blog is to share the great sketch below by Dan Meis (former director of NBBJ's sports group). I learned "scribble people" from Dan. But this tidbit is also to start waving an "NFL" flag for the southland! Will LA finally have an NFL football team to help revitalize and renew the urban core near LA Live and the Staples Center? Let's hope so! Nine architectural teams were invited to submit, NBBJ LA included.

From CURBED/LA:
DOWNTOWN: While news continues to percolate about that downtown NFL stadium, which architect is AEG is looking to hire? "There are no designs yet, not that I am aware of," says AEG spokesperson Michael Roth. "But there may be [designs], I could walk into a meeting, and there could be a model." So there may be a model out there. At this point, one would think AEG would go with whomever designed the Staples Center (NBBJ) or whomever designed the master plan for LA Live (RTKL). Dan Meis, who used to work at NBBJ, also designed the city of Industry stadium.

AND WHAT'S WITH THE GOATS???: The CRA put out a press release this afternoon announcing the imminent return of the Bunker Hill goats, who will eat the weeds of the hill. The four-legged animals will be in downtown for a week starting July 6th. Maybe the goats can start a football team, too. [Curbed InBox]